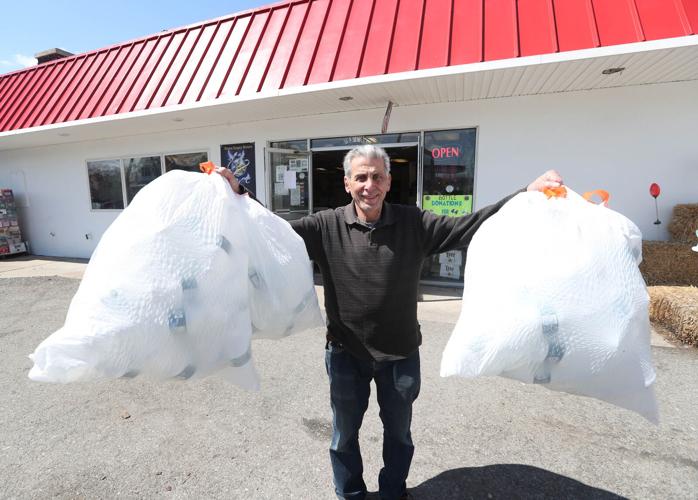 Lewiston Man is Making a Difference, One Nickel at a Time

Bottle returns are worth only a nickel apiece, but Angelo Sarkees knows that they can add up. Since the summer of 2013, Sarkees has donated more than $100,000 to four western Niagara County nonprofit agencies that aid the homeless and poor, and he said that about 60% of that money has come from turning in recyclable beverage containers. That’s about 1.1 million bottles and cans, Sarkees estimated this week.

“I passed the million mark in October,” the 75-year-old Lewiston man said.

The rest of the donations for his Deposits 4 Food program came from cashing in scrap metal, Sarkees said, but he has de-emphasized that side of his activities in recent years. Tuesday, Sarkees presented his latest checks to Care and Share in Ransomville and the Wilson Food Pantry. On Wednesday, Sarkees will make donations totaling $2,100 to his two main beneficiaries, Community Missions of the Niagara Frontier and the Heart Love & Soul food pantry, both in Niagara Falls.

He said those two organizations have received about 90% of his aid over the past nine years, and with the next checks, the donations he’s made since 2013 will exceed the six-figure mark. Sarkees is one of Community Missions’ longest running and most consistent donors, agency spokesman Christian Hoffman said.

“We could use dozens, hundreds more with the passion and the work ethic of Ange,” Hoffman said. “He is truly remarkable.”

Sarkees said he started out collecting discarded bottles and cans on his own. Sarkees now has developed a network of about 40 area people who help him collect beverage containers.

“Right now I’m at the point where people just give them to me out of their homes,” Sarkees said. “I have a few other collections I make, but 90% of my bottles now, I have a routine route that I pick up once or twice a week. It generates now $600 a month in bottles, a couple hundred in scrap.”

“He’s working smarter, not harder,” Hoffman said. “He’s got a lot of people that are collecting for him, organizations or businesses that will call him once they have a lot that are stored up.”

A ceremony honoring Sarkees for cracking the six-figure mark in donations was to have been held on Thursday, Earth Day, at a ceremony at Community Missions, but a scheduling issue resulted in its postponement until next week.

Sarkees always has had a concern with cleaning up the environment. He’s retired from the state Department of Environmental Conservation, where he worked on wastewater issues.

If not for his efforts, “Stuff I collect might end up in a landfill,” Sarkees said. “The metal could be garbage. A lot of it could be recycled, but a lot of it wouldn’t.”

“We go out together with our truck once a week to pick up empties,” Adamson said. “It’s fun.”

How long will Sarkees keep collecting cans for his favorite charities?

Stay up-to-date on Heart, Love & Soul news and events, and learn how you can help support our mission.